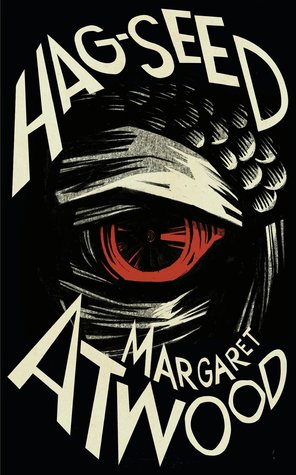 This is the four hundredth year of Shakespeare, and his plays are enjoyed, and loved, and relevant today, as they were in his time. The Hogarth Press was started by Virginia and her husband Leonard Woolf back in the early 20th Century. Virginia Woolf was a lover of Shakespeare, and that was reflected in her writings. Their goal was to publish new writing by new, up-and-coming writers. The Hogarth Press, famously, denied publishing James Joyce’s Ulysses.

In 2012, Hogarth was started with the same mission, and recently they started The Hogarth Shakespeare Project where prominent authors would take up their favourite Shakespeare Plays and would re-tell it in a contemporary setting.

This is the latest to be released, with more on the way. Margaret Atwood is an amazing writer, though, I’m a bigger fan of her poetry than her fiction. She has taken up The Tempest, and has set it in a prison.

As we know, The Tempest is a play about revenge, and is a bit fantastical. It follows Prospero as he brings on a tempest that shipwrecks Antonio, his brother, and his companions. He, along with Alonzo, the King of Naples, had tricked him out of his Dukedom, and now he seeks his revenge. He is aided by Caliban, a deformed child of the witch Sycorax, and Ariel, a spirit that he has trapped and now reluctantly assists him in his nefarious deeds. Meanwhile, Miranda, Prospero’s daughter, falls in love with Ferdinand,

In Hag-Seed, we meet artistic director Felix, who was fired from his position as he was directing a radical interpretation of The Tempest. Now, twelve years later, he is working at a Correctional Facility where he is teaching Shakespeare to the inmates. Here, he decides to put on a play based on The Tempest, because he learns that his former boss, and the person who was responsible for firing him, is coming to visit the Correctional Facility.

The book is beautifully written, the characters work as themselves, separate from their Tempest counterparts,  as well as re-interpretations of characters of The Tempest. I don’t think I’ve read a re-telling quite like this before where the play is constantly referenced and is used a means of enacting the play in Felix’s life, and as a means of revenge.

The Tempest is one of my favourite Shakespeare plays, and Margaret Atwood is the perfect author to re-tell it, and what a success it was. I absolutely loved the book, the language, the pacing, and the Shakespeare lessons one gets from it.

If you love Shakespeare, or you just love a good read, Margaret Atwood’s Hag-Seed is the book for you!